Maleficent tells the story of the villainess from Sleeping Beauty. Starting out as an innocent fairy in the depths of the forest the movie follows Maleficent in her betrayal, downfall, and eventual redemption. Yup, that's right, redemption. Which I'm totally fine with, by the way. Didn't think I would be (and the part of me that doesn't like wanton messing with myths still doesn't), but I can't help myself: The acting is much better than I expected, particularly Jolie, who's known for her not-so-acty roles. There's a good amount of chemistry in the cast and it's the chief thing that helps sell the premise. Jolie really sells the role well and the writers pair her up with Aurora in an inspired way! The movie puts a fair amount of pathos into Maleficent's struggle to become the pure-hearted being she once was.

The effects are...decent. There's some obvious CGI here and there that's a bit annoying at times, but most of the effects are done well enough that  I didn't notice them. I did find myself liking Maleficent's wings, they help define the character in ways that are hard to talk about without spoiling. And the dragon at the end's pretty cool as well.

Speaking of the end, the movie builds to what is ultimately one of the most disappointing endings I've seen in a movie. All of a sudden the movie seems to forget it's own interior logic. Maleficent goes from badass to damsel in distress because the writers demanded that it be so. It's sad, because the movie forgot that sometimes it's OK to not go for the big and flashy salvation and stick with the "stay true to the character and things will work themselves out" approach. Because, had they done so, I would have found myself a fan of the movie instead of a frustrated viewer. There was promise in Maleficent, and the fact that they screwed it up with that horrible and hammy ending is a bitter pill to swallow.

While it was a good movie 3/4's of the way through, Maleficent gave up on it's engaging, character-driven plot for sound and thunder that amounts to nothing more than a sick feeling in my stomach. If only they had realized when the actual moment of Maleficent's salvation was the writers could have let the movie have the sweet ending that it deserved. Instead we got... that.
Posted by Unknown at 12:00 AM No comments:

Email ThisBlogThis!Share to TwitterShare to FacebookShare to Pinterest
Labels: Better Late Than Never 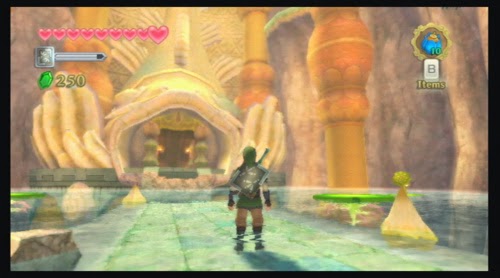 Ever since the inception of Zelda there's always been a group of poor, pathetic, souls who want to make a Zelda-themed dungeon.  I am one of those poor, pathetic, nerds, so during my time playing DnD I tried as hard as I could to make Zelda-ish dungeons, always to the harm of my campaign. Part of that is the open nature of a paper-and-pencil RPG, but that's hardly the only thing standing in the way of making a good Zelda paper and pencil dungeon. Most people who have tried (and failed) to make Zelda dungeons just try copying blindly, which is the biggest mistake made.

What makes a Zelda dungeon so much fun to play?

DON'T
DO
Making a dungeon is a whole lot of fun. Making a Zelda dungeon should be fun and challenging. Go out and make awesome stuff for your players!
Posted by Unknown at 12:00 AM No comments: I've always liked Luke Skywalker. Something about the character has always appealed to me: the guy who just goes and does the right thing because it's the right thing, consequences be damned. The story of the original trilogy was Luke fighting to keep that passion throughout all the changes that were thrust upon him: the death of his family, the loss of the Hoth base, finding out that not only was Darth Vader his father but that no one else thought he should be saved. Luke's arc was about someone refusing to lose their innocence to the overwhelming darkness that had claimed his father. a man whom he struggled to be like in spirit but not actuality.

And that's what I love about the Machete Order (Episodes 4, 5, 2, 3, and 6, the words Machete Order are actually a link): it deepens Luke's story. I watched this order with my wife Maria a few months ago (mostly against her wishes, Star Wars isn't her cup of tea). She watched it with me because I really wanted to try it and, while she had seen the original trilogy, she had never seen the prequels, so it made for some surprises for her. Episodes IV and V went about as expected: Maria tolerated them while I remembered what I loved about them in the first place: a simple tale about a boy who would be a hero.

Then we started on II and things changed. Gone was the optimism, the spark, the charm, and fight scenes that actually seemed like fight scenes. In its place was depression, despair, weakness, and a whole lot of flash with no substance. But somehow it worked, especially Episode III, which saw Anakin's true trouble: he had no moral compass. Anakin, while phenomenally powerful, had no way to figure out what the right thing to do was. His relationship with Obi-wan was wrecked and perverted. He hadn't gotten the guidance he needed to become a strong person. So when it all came down to that fateful scene with Mace Windu and Palpatine on Coruscant, Anakin goes with the guy who promises to help him protect those whom he loves. The fact that Anakin had no idea what he was going to do up until that point is what  makes him such a flawed  and tragic character. 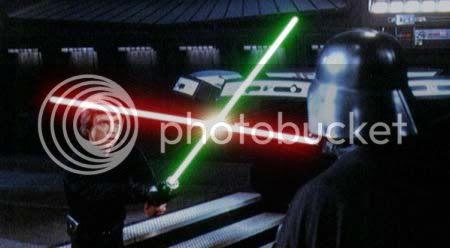 When Return of the Jedi came up the conflict became clear: Darth Vader was a hopeless, bumbling, incompetent, tragic man who had no moral character whatsoever. Anakin was no her until he saw Luke stand up to Palpatin. And that's when Star Wars finally crystallized for me.
I'd always felt that the trial of Luke during Return of the Jedi was odd, because Luke isn't the sort of guy who would just commit evil. That's not Luke's struggle, not really. No, what we were watching was Anakin finally being won over by his son, bit by bit. He put up a fight but Luke never gave up on Anakin, something that Anakin had never had before.  The struggle became about Anakin's redemption. Luke's almost suicidal trust in his father had finally paid off. Luke had won and it was well worth the wait.

I don't know if George Lucas has seen anything about the Machete Order, but I'm completely sold: this is the definitive way to watch Star Wars. It improves the original trilogy by putting two of the prequels in as backstory, allowingr you to enjoy Return of the Jedi for the masterpiece that it was always intended to be. Luke was always meant to save Anakin, that was the point. And the Machete Order delivers this in the clearest way possible.
Posted by Unknown at 12:00 AM No comments:

Why Spider-Man Should Be Married So I just read this article here on IGN, which states that Spider-Man should remain single. I disagree fundamentally. Spider-Man is a story about growing up, responsibility, and finding your place within the world. That's what the mythos are at it's core. Marriage is natural part of growing up for many of us, so it makes sense for the everyman of comics to face what the everyman does: commitment to someone else. Furthermore, nothing makes someone feel as in over their heads as fatherhood. You want a beleaguered Peter? Try being a father who has to go take out the Rhino, that's much more complicated. And finally Peter and MJ do actually belong together. The two of them (especially in JMS's run) share a common core and MJ is in much the same boat as Peter being a super-model as he is being a superhero.

Spider-Man is the ultimate everyman, the guy who is a hero while still going home and maintaining everything that a normal man can under the circumstances. What's more normal than having someone to share your life with?  Peter's a good guy, he would attract someone like that to himself eventually. Heck, it doesn't make sense if he doesn't , most Americans will. That creates a different type of story, to be sure. Peter now has to deal with living with someone else and how he and his wife will change as a result. Given how tumultuous a marriage can be without the added stress of supervillains screwing up your home that makes for one eventful marriage and one heck of a story. Again, JMS pulled it off, what's preventing other writers from doing that? If they're not even able to grasp that basic part of Spidey then what are they doing writing him in the first place?

And a lot of people comment on how Peter wouldn't be so down on his luck and identifiable as a married man. Excuse me, but what universe do you live in, where being a father and husband doesn't immediately give you a whole host of commitments that are stressful to keep without being a superhero? Can I live there? Cause, as a husband and as-of-last-week father, that sounds like a nice world to live in! Things get much more complicated as a normal dude, I can't imagine what it would be like  to be Spider-Man on top of that. That's a good story.

Finally, the article in question asks why it has to be MJ, since Peter's had multiple loves. Um, who are you counting here? Black Cat? Cause that looks a lot more like lust a lot of the time than love. Ooh, Betty Brant? Yeah, she's with Flash, probably not such a true love thing (and even if she isn't right now you certainly get my point). No, it has to be MJ at the end, and that's because the two of them are actually very similar in all the right ways. MJ, as a model, has a lot of public scrutiny on her and projects her own image, producing her own secret identity. I always saw the two characters as being more of a yin-yang, sharing the same core while expressing it in very different ways. That's MJ portrayed at her best and I can't imagine those two not being together.

To say that Peter is more relatable being single is to miss the entire point as to what marriage gave him (or sometimes did, depending on the quality of the writer) in the first place. All you have to do is to take what normally happens in a marriage and run with it. It's easier said than done as some of those 20 years of marriage showed, but at it's core it's still the same hard-on-his-luck guy trying to make his way in a world that requires him to be a hero, even if he really doesn't feel like one a lot of the time. If anything, marriage would just make that matter more.
Posted by Unknown at 7:13 PM No comments: