Posted by Unknown at 1:46 PM No comments:

The City's Lights: Yoshino and the Creative Process (Part 1) 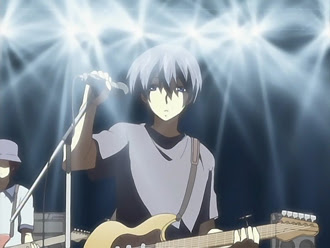 So, I was watching After Story episode 12 yesterday, which has a pretty heavy significance for me, and I felt a bit of a blog post about Yoshino's backstory as it's presented here, in episode 12.

Yoshino nails the journey of pretty much creative person... ever. You start out just wanting to make cool stuff, and eventually realize that what you make effects other people in a pretty serious way. Unveiling yourself in front of people causes them to change, and usually for the better. I mean, how could that not happen? Even if you're showing something really horrible (like a horror movie, say) it still hits people right in the heart and can get them to change. Self-revelation is relational, it's just that in art you don't necessarily know that you're relating!

Of course, finding out that you've been relating to a whole bunch of people without knowing it is paralyzing. I mean, you've just been told that playing in your sandbox and having fun is changing people's lives or (in the case of my iconography) realizing that people can glean information about you that you didn't necessarily think was obvious... yeah, paralyzing. What people do with that information entirely defines the rest of your artistic career. You can either realize that you should still focus on what you love and the others will relate to you focusing on it, try to make things specifically for the people watching, and/or just shut down immediately.

Well, Yoshino arrived at the first option after doing the last two, which is probably the worst route to take. Yoshino didn't do the right thing, didn't realize that his stuff needed to stay essentially self-centered, or... is it really self-centered to not focus on the others who are looking in on your creativity?  I mean, you're relating to things that you like, you're essentially relating to God and letting people watch.  Maybe that's why art is so beautiful. You're watching someone attempt to reach out into the black and get rewarded for it.

Email ThisBlogThis!Share to TwitterShare to FacebookShare to Pinterest
Labels: Clannad, The City's Lights

Some House Rules for 13th Age

So, one of the wonderful things about 13th Age is that it's intentionally open and allows for houserules. Here are a few that I'm thinking about.

Fate Points
Pick three traits such as Courageous, Forked Tongue, Wise, or whatever. Whenever you use one of these traits to alter the story in an unforseen or troublesome way you get a Fate Point. You may use a Fate Point to add a +10 Fortune bonus to any d20 roll. You may never have anymore Fate Points than your level.

Fate Points are awarded at the end of the session by popular vote.


Action Points
Everytime you do something heroic that makes everyone else say "Wow, that's AWESOME!" You get an Action Point. Action Points are spent to gain either a Standard or Move action or a reroll on any damage roll (take the higher of the two).

Unlike Fate Points, Action Points are awarded on the spot and can be spent immediately. You may only spend one Action Point an encounter, and you may only keep your level in Action Points in between sessions.
Posted by Unknown at 7:31 PM No comments:

Gaming Update as of November

Revolution! (Burning Wheel): This is the rebooted Revenge of the Countess of Fire. The players are actually running the game now, and it's going really really well. Granted, we only have one more session until we're done for the semester, but with that I eagerly look forward to everyone coming back next January...

So what'll be happening next? Well,  I really need to finish the online Mouse Guard game, and after that I'll be running an online Misspent Youth game. But as for in person, I'll probably run 13th Age next, and see how that little beauty plays over time. 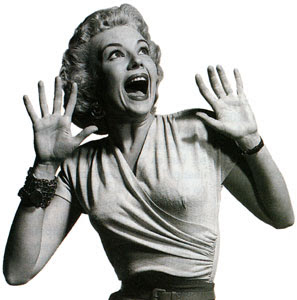 So, Andy (CarpeGuittarem) came over for Thanksgiving day (Happy Thanksgiving BTWs!!!), and we had a blast! There was guitar playing, turkey eating, TWO, count'em, TWO Fiasco games, and much fun was had by all. We also finally tested out 13th Age, which I had pre-ordered and am waiting for oh-so-patiently.  I liked what I found.

The players were Andy, a human rogue with a complicated relationship with the Elf Queen, and my youngest sister, Naomi, who played a drow paladin (who's unique thing was that she was the last drow on the face of the earth). We amped this game all the way up to 10th level, since it was going to be a one-sbot, and we decided upon a suitable storyline for our game. The Dwarf King had wiped out all other drow for taking over his old kingdom, and only Irene, Naomi's drow, had escaped his wrath. The Dwarf King had given over his allegiance to the dark and evil Crusader, if only it meant that last damn drow would die. Well, the Crusader took him up on the offer. Incidentally, Andy's character had a very negative past with the Crusader as well, and was very... well... well-known.

Character creation took about as long as expected, considering I had them make the top level characters. This is one of the points I already like about the game: there are only 10 levels, and each level really actually counts. Neither of the players had any trouble, and put characters together relatively easily. The talents are concise, easy to explain, and are presented well in the PDF. While the rogue came out as an incredibly competent (and AWESOME) character, Naomi's paladin didn't seem to have a very defined niche, being more of a utility class than a straight damage class.

Overall, the mechanics are my favorite rendition of the d20 engine so far. There's an awesome escalation die, which makes the combat easier for the PCs as the fight goes on if they work together. I really enjoyed the Icons mechanics, and they help the GM not have to prep beforehand. Battles are easy to prep and run and considering that this is a combat game that's a really good thing.

On the whole, I really recommend getting this game when it comes out. This is very much so the definitive d20 fantasy game, and I know I'll be running this instead of 4th edition from here on out...

UPDATE: Since the writing of this review v6 has come out, and things have changed a little bit. Paladins are now officially the "you can't kill me or anyone else class". Awesome.
Posted by Unknown at 8:48 PM No comments:

When I first started iconography, I knew what icon I wanted to do as soon as I was done with my iconography workshop, where I did this icon:

I wanted to make a Trinity icon! So, being the precious teen that I was, I sat down to pray one out. It was an unmitigated disaster. It was so bad I gladly gessoed over the board and turned it into this Christ icon:

I didn't attempt the Trinity icon since, until a few weeks ago. I'm really proud of it, and glad I had an option to finally do an icon that was a principal reason I got into iconography in the first place.
Posted by Unknown at 11:27 AM No comments:

New Art: All the Stars in the Sky 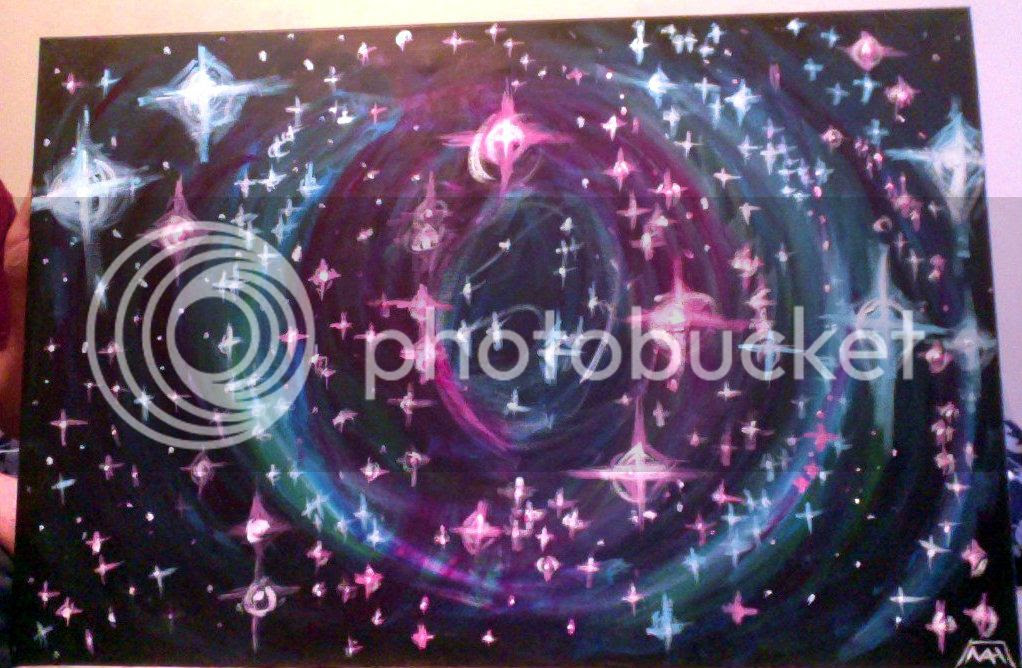 The entirety of my time at Benedictine College as an art major, I've never made any non-iconographical piece that has actually stuck with me as something I was proud of. It's not that I've produced bad work, I just don't enjoy it.

Thank goodness, cause I finally made something I like. All the Stars in the Sky was based off of Five Centimeters Per Second's night skies. I've always enjoyed that man's work, and I'm glad I could make something I'm actually proud of.

And Because Hannah is Awesome...

Posted by Unknown at 3:21 PM No comments:

So, after a number of months, I've finally started to "get" how to play Burning Wheel. Standing back and only challenging the players when they fail a roll is a bit challenging, but so incredibly worthwhile... except for one thing. Burning Wheel is a long term game, and I am not known as the most patient person on the face of the planet. Sometimes I just want something NOW!

I apologize for that outburst of evil laughter, but Fiasco is so damn evil that it makes me giggle. But then again, I like Oh Brother, Where art Thou?, Raising Arizona, and The Ladykillers.

That's right, this a game that's made to emulate Coen brother movies. Be afraid, people! Similar to another favorite game of mine, 3 Dragon Ante, this game seems to take the worst of all humanity and makes sure that you have to indulge in it as much as possible to get ahead. The game is GM-less and, while it doesn't look it at first, this can be a ridiculously competitive game. Why? Because in the first half of the game you can help determine how crappy of an ending your "friends" have. In the playtest game I completely screwed over a friend of mine, and we both enjoyed it immensely, if only because I managed to get the upper hand through good play.

I'm not gonna lie, this game probably doesn't have to be so damn competitive. But, but... why would you play it any other way?

The Feast of Saint Josaphat and Ecumenism

So today is the feast of Saint Josaphat, a man who was killed by an Orthodox mob shortly after the Union of Brest. In the history of ecumenism, Josaphat isn't exactly something new these days: both sides of the Catholic-Orthodox "discussion" (proclaiming "we are right" isn't a discussion) have their share of holy men who died to the other side.

And that's the rub. We both have holy men.

This is something that I honestly wonder why we don't think about too often. Catholic and Orthodox have saints, with confirmed miracles. This isn't me being wistful, people go out of their way to verify these things. We have miracles, we have saints, on both sides. God favors both. God has not taken a side in this puny little debate we holy Christians have taken up. If He had there wouldn't be an argument about who was right, like with the Arians or any of the many heresies we've had over the centuries.  I mean, for all the people from Facebook who are reading this and who care about the schism, take a good hard look at the fruits of the other side. Yes, you will see mistakes, killings, scandals, government take-overs, etc. But you will see genuine saints, if you look hard enough and if you swallow your own pride for two seconds.

It almost doesn't matter what we're arguing about, because God does not seem to care about who's right in the Catholic-Orthodox split. He still considers us one, so what is with this incredible hubris?

Because that's your only excuse.
Posted by Unknown at 1:31 PM 4 comments: 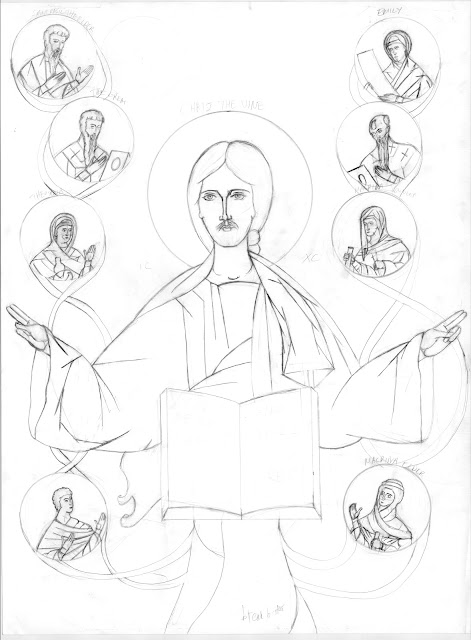 This may not be the final image, but I'm so excited I HAVE to show you guys! Isn't it awesome??

Posted by Unknown at 8:09 PM No comments: