My apologies about the long hiatus, work shifted around and I needed some time to adjust. Oh, and it doesn't help that I don't have internet at my house either. Here's the next part of the The City's Lights. 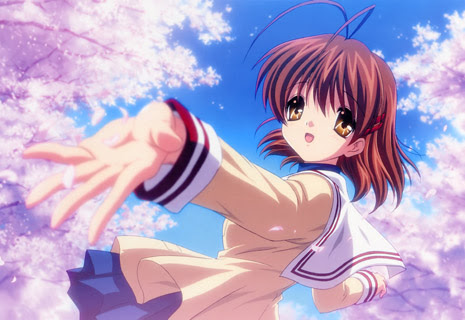 Nagisa really is the heroine of Clannad. No matter what you may think of Tomoyo and Kyou, Nagisa is the lady that Tomoya comes back to,  time and time again. A lot of people wonder why in the world Tomoya chose Nagisa, of all people, to be his wife. The sheer amount of Tomoyo and Kyou ecchi on the interwebs is enough proof of the fact that people think Tomoyo and Kyou are much much sexier than Nagisa, and the fact that there's an entire game about Tomoya and Tomoyo proves that Nagisa really doesn't have to be the one for Tomoya. In fact, come to think of it, there's pretty much no obvious advantage that Nagisa has over Tomoyo (sorry Kyou fans, but she's not really in the running at this point.  Nagisa and Tomoyo are too awesome). In fact, Tomoyo has much more in common with Tomoya than Nagisa does, especially at the beginning of Clannad. The two start at a very similar point, wishing to redeem themselves of their former life of being delinquents.

And that very well may be the reason why, come to think of it.

As of recently I've been discussing analytical psychology with my friend, Marty (the guy who introduced me to Clannad, ironically enough). We talked about the fact that everyone has what's called "the shadow" side of their personality. Essentially it's the underdeveloped part of someone's psyche that starts to get developed as part of a person's maturation. Essentially as you grow up you start to work on the parts of yourself that didn't get so much development as a child. The trick is to let  the shadow develop while not abandoning the rest of you, and to let them both integrate. This is essentially the reason why a lot of opposites attract: they're not really opposites, but emphasized different parts of a very similar personality to such a radical degree that they're now trying to cross back over, so to speak.

Which is why Nagisa and Tomoya are perfect for each other.

Throughout the entirety of Clannad, Tomoya and Nagisa affirm each other's strengths and weaknesses in ways that are... well... pretty damn cool. While they're not always patient with each other, Nagisa and Tomoya always accept the other in the end for exactly what they are, and since they're more similar than anyone else in the anime, help bring out the underdeveloped parts of each other into the light for other people to see. Tomoya helps Nagisa realize that it's OK to be her strong but prone-to-tears self, and vice versa. Hell, Tomoya cries just as much in Afterstory as Nagisa does in the first season! While Tomoyo does help him develop in a similar way, there's a vulnerability that Nagisa shows at the beginning that is enough to get Tomoya right off the bat.

This touches upon something that I think people miss a whole lot: the nature of what makes a good spouse. Notice that it isn't the one who's sexy, the childhood friend, the annoying little girl who tickles our parental instinct, or even the best friend, but the one who is always there. The world is so caught up with the touchy-feely of true love that it forgets that friendships break, sexual attraction wanes, loyalty can be broken, and even the parental instinct can be warped! On the flip side, all those things develop over time, so the question is, will that person be there tomorrow? Cause if they will be, and if they're not trying to hurt you, that's what's important. Nagisa was the only one of the bunch who did this every step of the way.

No wonder Tomoya missed Nagisa so much, she was the only person who ever helped him love all of himself, good, bad, strong, and weak. There's a bond there that goes so much deeper than that of any friendship that it really is a stroke of genius that those two wound up together. In the end, those two are the only ones who can be there for each other. No one else will do.

Which is one of the points of the anime, really. Some people are irreplaceable, so much so that, after a point, they are the only ones who can reach you.

Posted by Unknown at 2:54 PM No comments:

Email ThisBlogThis!Share to TwitterShare to FacebookShare to Pinterest
Labels: Clannad, The City's Lights

Our Lady of the Morning Star 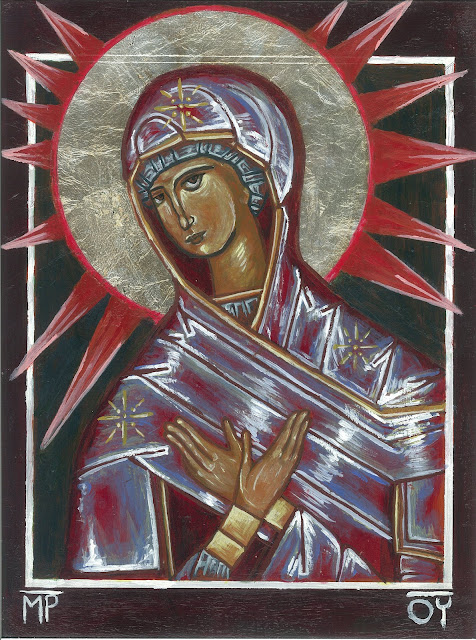 Posted by Unknown at 1:06 PM No comments:

Email ThisBlogThis!Share to TwitterShare to FacebookShare to Pinterest
Labels: Iconography 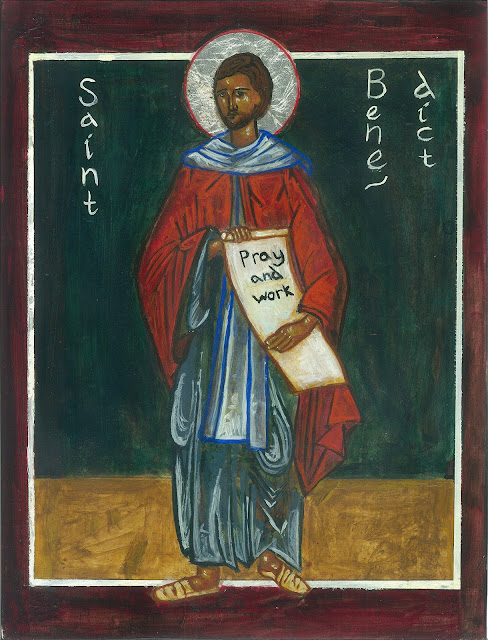 Posted by Unknown at 1:03 PM No comments:

Email ThisBlogThis!Share to TwitterShare to FacebookShare to Pinterest
Labels: Iconography

Thanks to Andy's ruminations about ruminations over on his  blog, I've been thinking about the same topic: why are table-top roleplaying games played? I've heard  a few theories so far. These theories are most popularly stated when we're trying to convince someone to play with us who have never played before. The following three are the most popular ones I've heard.
Point is, all of those reasons (with the exception of the second) are pretty close to why we play, but  I don't think any of those reasons truly hit why us nerds (and those who lovingly put up with us) sit down, roll dice, and talk for hours when we could be outside playing in the sunshine. I mean, a lot of my best RP moments have nothing to do with the story and, in fact, were detrimental to the story. And while, yes, a group was involved, we weren't necessarily rooting for our team, because if we were we'd be angry if we lost that night (but I just GMed a session where the players were thoroughly humiliated and they loved it), and getting to make something new is not even close enough to a good reason to adequately reply to. I mean, we make new stuf fall the time, doesn't mean we enjoy it!

No, there's something more to this.

I have no idea. I'll get back to you on that.
Posted by Unknown at 5:23 PM No comments:

The City's Lights: Akio's the Man of the Hour

I've said before that this is the most important speech in the entire anime, bar none. If I had to do away with all of the masterpiece that is Clannad and show someone one moment in an effort to sum up the show, I'd pick this one.  It carries the crux of why Nagisa and Ushio are the way they are, and defines what the 5-year old heroine will be like  so well that, when she comes along in about twenty or so episodes, she's totally accepted as if we expected her to be like this. I mean, considering how Nagisa was originally, why would be Ushio be any different?

The first is that I doubt Akio really had words for this before the speech. Part of it just might be a simple miscommunication on the part of Akio and Sanae to Nagisa: it was so fundamental to their existence they forgot to talk about it. But of course, that's not too helpful to a girl whose self-confidence has been destroyed by years of illness. Nagisa's reaction is pretty darned spot-on for someone in that position. So Nagisa grew up without the assurance that she so badly needed, but had no idea how to ask for. Once Nagisa finds this out she quickly becomes much more self-confident and a very strong woman in her own right. She stands up herself quite a bit after this incident, and even convinces Tomoya not to run away from the town, in the calmest and strongest scene that she has before Ushio's birth.

The second reason dovetails into the first: now that Akio and Sanae know they need to talk about their ideology, they never shut up about it. They constantly remind Tomoya and Nagisa of their love for them, and do everything two parents possibly can to reassure their dream. Why on earth would that change with Ushio? If anything, they would let Ushio know that she is their dream, and that everything is for her. A child raised in an enviroment like that would be very strong, wouldn't she? She'd know that her dreams are her parents' dreams, and that she should reach out for them with all her might. Huh..

The third reason why Ushio is different is because of, well, Tomoya. Tomoya was a rather active little kid, filled with his own ideas about the world. But, unlike Tomoya, Ushio was raised with the knowledge that the world was a very good place, even if it wasn't perfect. She does in 5 years what it took Tomoya to do in 18, essentially.

But none of that would have happened without this play. The entirety of the first season was for this powerful moment, where we realize that Ushio's going to be OK without even knowing who she is...
Posted by Unknown at 5:31 PM No comments: