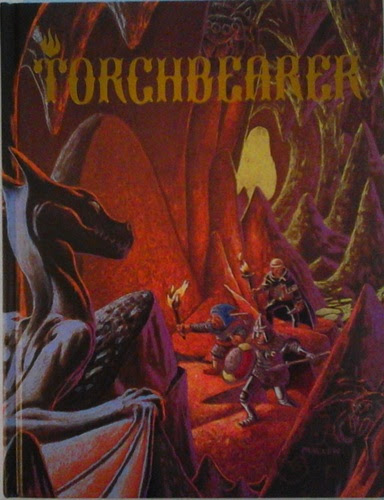 OK, so I might have Kickstarted this the instant I could, I might have man-squeed with delight when I first saw it and... I might have played a campaign of it already, before I even thought about writing the review. I might seriously be in love with this game, which Maria may think is a bad thing, but oh well. I suppose I'll have to work on it. Anyway, on with the review!

Torchbearer is the newest game by the Burning Wheel group, this time led by Thor instead of Luke. It takes the basic Mouseguard engine and screws around with it, making what the crew calls "Advance Mouseguards and Dragons". That's somewhat accurate, although not complete. Mouseguard, while hard, has a turn structure to protect the players from the GM's machinations against him. The Player's turn offers relief of sorts to the players that I'd never even known was there in Mouseguard. Y'wanna know how I figured out that the Player's Turn was a relief mechanic of sorts?

I played Torchbearer and cried.

On a surface level Torchbearer isn't all that different from Mouseguard. You have Nature, representing how much like your race, Will, your social stat, Health, your physical stat, Circles, how well-connected you are, and Resources, your cash (which starts at 0 at the beginning of the game, period). Your skills advance based on a pass-fail system that's extremely simple and intuitive. Extended conflicts are put together via a script-three-moves-at a time system that's simple and awesome. Actually, just to save space, here's my Mouseguard review. There, now that you're done with that, I can go on about the differences.

First of all, there's a clock of sorts put in the game. Every four checks not made as a result of an Instinct you get another Condition. These Conditions are similar to Mouseguard, but are much more beefed up and, well, terrifying. You do not want these conditions. One at a time they're not too bad, but start stacking them up and... well...

I think that communicates what happens to your character when you get all the conditions pretty adequately. Don't have this happen to you, just don't.

Anyway, so there's the clock. You can reset the clock by either going back to town or taking a rest in the dungeon. Doing so invites it's own problems, of course, like accidents in the dungeon, new laws or being outright barred from said town. But it's still worth the chances to reset that clock.

Oh, and speaking of dungeons, don't think you can fight your way through: the Burning Wheel Co. put in a mechanic called Might, which tells you on what magnitude of awesome the creature is (your characters are at 3). If the creature has a Might 2 or higher than your character's you may not kill, drive it off, or attempt to capture it. That's it, there's no chance of anything like that working. You'll have to trick it or convince it to go away. There are things in the world you'll need to go around.

Monsters are also a bit different this time around. They're a bit more sophisticated than in Mouseguard, where they only really gave you the Nature and some of the weapons it would use. Here they give you the disposition for each of the conflicts they're in and the weapons appropriate to that conflict.

Now there's one particular set of changes that are the most obvious, and that's the BDnD-esque additions. There's levels, mapping (of a sort), spells, essential clerics (played a campaign without one, see the gif up above for the results), all like BDnD...except... well... better. Heck, if you're looking for a good old fashioned dungeon crawl done to the utter nitty gritty, this is that game. You even have to account for what's in each hand! This nitty gritty, contrary to a lot of games, doesn't slow it down or make it less fun. If anything, the constant minding of resources in the face of certain and utter doom is awesome. Going to town, getting your stuff replenished, heading back out to get stuff you don't have any actual room for...

After an interminably long time of not posting, I've finally got a few things out of the way, and well, here I am! Here's a two thing update:

1) I'm engaged to Maria! It's been a crazy few months as we've tried to figure out what's going on with jobs and all that. I'm happier then I've ever been, being engaged to the lady of my dreams. It's been a wild ride so far, but it's everything I've ever wanted. S'yeah, happy :)

2) Linked to that I'll be going into the military as of February 19th as an E4. I've been accepted into the N25 job, which is basically IT for the Army. I'll be out late October of next year. Obviously there will be a hiatus of this blog while I'm in bootcamp from February to May.

Anyway, so I'll be putting out a blog post each week, hopefully with some iconography updates here and there as I get access to a camera. Stay tuned!
Posted by Unknown at 5:48 PM No comments: