The Trolling of Evangelion- Introduction Disclaimer: The following is nothing more than a statement of opinion in an intentionally immature, ironic, and possibly satirical way. Granted, some of it is serious and somewhat thought out, but please remember that my seeming bouts of immaturiy are as much of a comment on the people who disagree with me as they're a comment on myself. So yes, the whole thing's a huge diss. I guess.
Hey guys, it's been awhile, but school's out and I was wanting to get started on another project. The whole purity thing will be touched upon again at some point, but for now I wish to do other things for the moment.
So I decided to write on Evangelion. Kinda random, I know, but hear me out. Evangelion is one of the most talked about anime of all time. It was presented during a time that anime was only for kids. The show proved that anime could be for adult, and opened the gate for intelligent cartoons everywhere. The show had been recommended to me by many people at college, and so i watched the Rebuild movies (which are the modern re-envisioning of the 80's cartoon), only to find that I hated them.
I hate Evangelion.
Now when I stated my opinion I was told that my opinion wasn't valid, because not only was I prig with no sense I was an ignoramus for not seeing the original show. Oh, and I had no sense of empathy. That one in particular stung a bit, for a few reasons:
1) It's a show, the characters aren't real. I'm allowed to be a bit judgmental if I don't find the situation entertaining. Considering how dumb people can be in real life it can be comforting to actually show my dislike of that way of thinking.

2) Because of 1, I have no real urge to think that a show about a complete and total wussy like Shinji is worth my time. If it was a wussy who got better, like Gurren Lagann, that'd be something different, but Shinji doesn't appear to be a hero.
3) I like shows about heroes. Not necessarily paragons of virtue but definitely paragons of persisting at virtue.
4) Since I like shows about heroes Evangelion really doesn't hold that much of a draw to me, because as far as I can tell with the Rebuild movies there are none to watch.
But those three reasons are not enough for a rational debate for die-hard idio...errrr.... fans, now is it? If I'm going to argue with them and destroy their precious baby they want me to really be able to destroy each and every single part I suppose. Fine by me, I like the idea of tearing something apart by my personal standards (which, while not hard to meet, are ridiculously strict and judgmental).
(And this is where it gets serious, for those of you who are keeping track)
More importantly, however, is that I honestly think that (based upon what I've seen so far) Evangelion is the very antithesis of a Christian story, which (considering my background) is really the only story I find worthwhile. There's nothing very enlightening I find from pagan stories, given how they're usually about how we can't change our fate, something that I have no interest in being told. However, it's kinda hard to tell people about my gut instincts if I haven't watched the show. So I'm going to watch the show and see where it goes. I'll be posting on the next four episodes later this week or next week.
Let's find out if I'm right.
All images are lifted from Google Image search. No copyright infringment is intended or desired. If someone finds offense in what I've used please let me know, and I'll take it down. Thanks.
Posted by Nathan Augustine at 7:37 PM No comments:

Email ThisBlogThis!Share to TwitterShare to FacebookShare to Pinterest
Labels: Evangelion

Our Lady of Perpetual Help-Finished 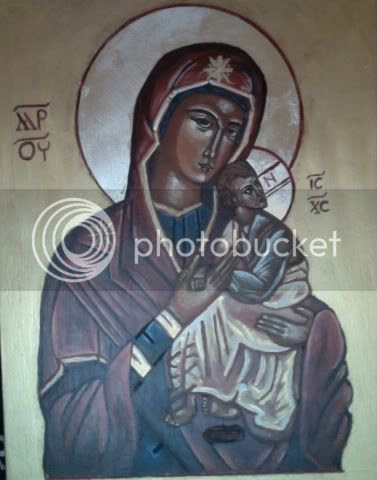 Posted by Nathan Augustine at 5:36 PM No comments:

Posted by Nathan Augustine at 6:08 PM No comments: