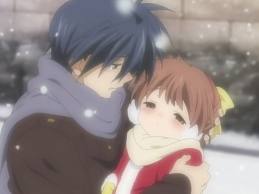 Hey guys, long time no post! I know it's been a while, but I've got a minute from moving into my new school to come back to my favorite blog. What have I been up to? Why, watching Clannad of course! What else would I be doing, besides iconography, moving into school and getting to know a whole bunch of new and cool people, and a good long distance relationship? That doesn't include 16 credit hours or three RP campaigns, of course. Not busy at all. But back to Clannad.

I just got done watching Clannad for the seventh time, this time with my father. For many reasons it was a beautiful thing to do, because I'd had a similar epiphany about my father that Tomoya had, although it wasn't for anything halfway as serious. Either way,it was wonderful to watch the show with one of the major people in my life. As I watched this time, however, something stuck out at me. It's been percolating for a while now, so I thought I'd write on it, and see how people reacted. This time I want to write specifically on Tomoya.

In The School's Trees post on Tomoya we'd stated that Tomoya is the common man, that he's the least likely person to be a hero, because he's...normal. And I agree with that (I mean, hell, I helped write it), but I found that I missed something in this wonderful show after the seventh time. Part of this has to do with the fact that I finally played a portion of the Visual Novel, and walked in Tomoya's shoes for a bit. That changed my view of the anime completely, because I bombed out within the first twenty minutes.
Yes, I flunked the Visual Novel.
I did it one more time before noticing the trend. The good things wouldn't pursue you, the plot wouldn't come and find you. Oh sure, the plot invited, but the plot never pursued. Ever. There were just hints of the good things to come that I knew from the anime so well, but nothing ever came of it. Why? Because I never went after it. Tomoya must grab life in the Visual Novel, and never let it go. Ever. Watching the anime after that gave me a new appreciation for the character of Tomoya, because, once he made this decision:


He never, ever, but never backs down from it until the death of Nagisa. He goes at his  goal with an iron will, with the impossible determination of a man who believes that there is meaning out there, and that even if he can't see it, even if he can't feel it, he knows it must exist. What led him to that conclusion? The answer is a bit silly, but it's true: sheer boredom. Tomoya was bored. He wanted a full life, and wasn't getting it, so he went out and lived one. He faced the darkness and walked right into it, daring something that most of us will never do.  The fact that he ran into such sadness with little to nothing to guide him and went through it anyway, only to quit when Nagisa died, says a lot about Tomoya's strength. His fortitude, which is enormous, couldn't make it through that alone, and would have to wait five more years for Ushio. But remember that when Ushio was ready, Tomoya found the strength again. Like his inability to cope with Nagisa's death or not, I doubt most of us would do half as well with the circumstances Tomoya had bulldozed his way out of. Tomoya never gives up.

After that I found myself a bit of a wimp after watching him for this seventh time. Tomoya's will is iron, quiet, and purposeful. Mine is not. But I know I can be like him, because, as we'd stated, Tomoya is the everyman. He is us. He is us because he tries, and when he doesn't get it the first time he tries until he gets it right. The fact that the everyman can only get what he wants by trying every possible situation as much as he can is something I know I don't think about often.  But it certainly is helpful to think about, isn't it?
Posted by Unknown at 5:57 PM 1 comment:

On God and Sexuality: When I Was 15 (Pornography Part 1)

In typical fashion my sense of humor can be rather targeting. For those of you who are in the group of people that I targeted and think that I'm wrong, please prove it. I can guarantee that almost all of you can't, and that my remarks are, again, as self deprecating as they are accurate.
Porn... what the hell am I supposed to say about it? Some people think it's of the devil, some think it's a God-send to their pitifully lonely existence, some think it's normal, and a growing number of people keep putting it into their movies (Zach Snyder, I'm lookin' at you, you stupid douche of a director.), so it's obviously not something we can ignore. What do I think? I'm with the people who think it's of the devil.

Let me explain.
At the age of 15 I developed an addiction to pornography. Yeah, t'was a typical "I'm-lonely-and-need-something-to do" phase, like most of the people I know who start up on porn. It was all well and good, I suppose. Beautiful women that are naked are beautiful women that are naked. So that part worked out OK. But, good ole Catholic guilt kicked in. I knew what the Catholic Church said. Any teenaged male with a brain (the minority, I can assure you) knows. So I felt guilty, and so I confessed it to my priest.
His suggestion? Take a figure drawing class.
Now, for those of you who don't know what figure drawing is, that's where a naked person sits in the middle of a room, and people draw the naked person.
In other words, my mother freaked out. Oh, you should have heard the ruckus on that one. Mothers.
But Father was insistent. Far more than insistent, actually. I'm going to invent a word and say commandful. Yeah, I know I could have said commanding. No, I didn't feel like it. Anyway, off I went to take life drawing classes. At the age of fifteen. Was it weird drawing what I normally jerked off to? Well, yeah, duh. But I kept trying, and a funny thing happened. I began to hate porn. It was so...inaccurate. Actually, way too inaccurate. I'm sorry, lonely men, but women do NOT look like that. I took the class again a few years later, and that finished it off. It's actually impossible for me to be aroused by porn for longer than it takes for me to think. Videos are a problem, of course, but pictures? Not really. Does this get rid of my lust, or even my desire? Hell no, you crazy? I'm 22, zero desire is biologically impossible (sorry, Buddhism). But it certainly did help me realize one thing.
Pornography is not reality. And, as an intuitive, I can use all the reality I can get.
Posted by Nathan Augustine at 3:21 PM 1 comment:

Email ThisBlogThis!Share to TwitterShare to FacebookShare to Pinterest
Labels: Christianity

There's two reasons for no updates the last week:

a) My girlfriend from out of state was over for the week. I had a very nice week hanging out with her.

b) I just got out of the hospital from a car accident. I'm not seriously hurt, just a bit of whiplash and shock.

So while you've all been patient, please wait a bit longer. I'll get the stuff uploaded when I'm not in shock.

Peace
Nate
Posted by Nathan Augustine at 11:25 PM No comments: