Based off of the visual novel, Fate Zero is the prequel for the critically acclaimed visual novel (and mediocre anime) Fate/Stay Night. This anime focuses on the fourth Grail war, where 7 masters and 7 legendary figures ("Servants") fight for the ultimate wish-granter: the Holy Grail. It's rather hard to talk about this anime without spoiling everything (which is something you DON'T want with this anime, the surprises are amazing!), but I will say this: there is NOTHING this anime sets out to do that it does wrong. Nothing. All the characters are relatable, the music and visuals are amazing, and RIDER IS THE MOST AWESOME ONE OF THE WHOLE DAMN BUNCH! Watch for him alone, if for no one else.

Posted by Unknown at 1:17 PM No comments:

Because one of them made this meme to commemorate our tense session. 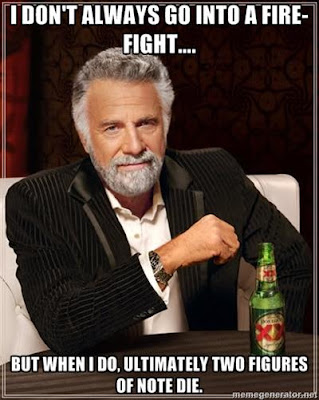 Thanks Hannah! This made me smile.
Posted by Unknown at 5:49 PM No comments:

My Disgust with Ecumenism and a Resolution (Rant) 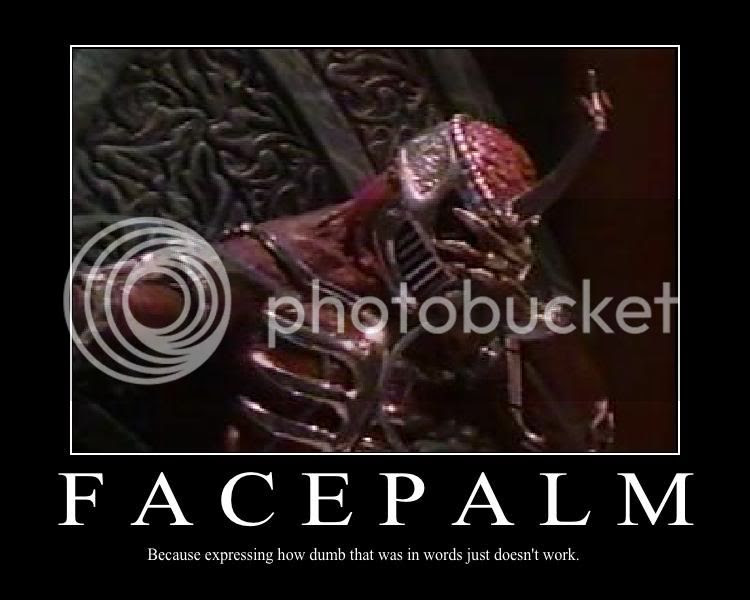 As a Byzantine Catholic I find myself highly concerned with Catholic-Orthodox relations, which only makes sense. I am an Orthodox in communion with Rome, it would be good to know when I get to rejoin my Orthodox brethren! And the only way to get this to happen is to hit people at the ground level and help them understand from where the West and East come from, in as charitable a way as humanly possible. With that in mind, I recently joined an ecumenical Facebook group to see what people were discussing and its...

Discouraging is an understatement. The arguments are about who's right and who's wrong, which is exactly the wrong way to go about it. You wouldn't do that in a friendship, would you? You wouldn't go and tell someone that the entire way they've come to live is wrong if they're your friend, right? You would try and understand why they think so differently, and how it might benefit them, before you open your mouth. If you lay blame in a marriage often enough it's going to just destroy the relationship. These are basic human principles that we can all agree to?

SO WHY THE HELL DOES IT SEEM TO BE THE EXCEPTION FOR A GROUP THAT CLAIMS TO BE ECUMENICAL?

Trust me, I'd understand a little more friction in a Hindu-Christian ecumenical group. Those two groups really don't have all that much to discuss without coming to blows. But the holy, apostolic, and catholic Church? We are ONE body! ONE! But instead we let the cancer of our preconceptions and past experiences get in the way of what we're supposed to be doing, which is healing the greatest cause of scandal we have! We have an incredible amount of work to do, and not a lot of time to do it in, and we sit around bickering about whose theology goes which way when I can guarantee that most of the people making these comments have done no serious amounts of studying?

Well, if you want change, be that frickin' change. From here on out I resolve to know East and West like the back of my hand. I want everyone reading this post who has a book or a source they think is relevant to either East or West to post it up on here or on the Facebook link. Doctrinal explanation, mysticism, apologetics, doesn't matter. Someone has to read the information and get it out there for people to read, and it may as well be me!
Posted by Unknown at 12:20 PM 4 comments:

Ha! Thought I wouldn't get back to this series, now didja? Well, I'll admit, I spent some time oggling Burning Wheel, but I've still got a series to put out and I will, gorramit.

Player's Handbook 2 had significantly less issues than Player's Handbook 1. The V-class structure was nowhere to be seen, and the Striker mechanics were different. But the defender in the book, the Warden, left a bit to desired, and the Barbarian was a bit lackluster...

This is a nit picky change, but Avengers in my version get a free bonus Domain feat from Divine Power that matches one of their deity's domains. It's just a nice way to further customize the divine classes, and isn't strictly necessary. But it's fun. Oh, and Avengers us their Wisdom to make Melee Basic Attacks.

Barbarians' defenses are... well, too low seems redundant, but it's true. Giving them higher HP doesn't help the fact that nearly every shot that gets thrown at them hits, and hard at that. There are two ideas that I have to help with that: up the Barbarian's AC and punish people for hitting the Barbarian.

Presence of the Savage
If you're wearing light armor or no armor (cloth) you may use either your Constitution or Charisma modifier instead of Dexterity or Intelligence to AC.

Punisher
Whenever you are hit by a melee attack the attacker is dealt damage equal to either your Constitution or your Charisma modifier+3. At level 11 this damage becomes 6+Constitution or Charisma, at level 21 it becomes 9+Constitution or Charisma modifier damage.  This rule has not been playtested. I'm pretty certain it'll work out pretty well, given that it's just the melee attacks and that'll make people dance away from the barbarian and, given that the Barbarian can get places pretty easily that means you give him another charge!

Horrific Charge
Whenever you charge you add either your Constitution, Dexterity, or Charisma modifier to your damage roll. This increases to mod+3 at 11th level, mod+6 at 21st level. You may also use any At-Will, Encounter, or Daily powers on a charge.

God, that looks terrifying. The barbarian is now a charging engine of destruction that'll mow down anything in his path. Again, this stuff isn't playtested, so please try it out and let me know what happens. I look forward to it!

Druids' only real problem lies in their inability to deal damage while in Beast form, so augment all their damage a step as done in the Player's Handbook 1.

As a matter of fact, I think the Invoker's powers should be Charisma-based, not Wisdom-based. A mouthpiece of the gods that isn't Charisma-based? Riiiiiiight...

Wardens are so... there's so much potential there, and it's all in their marking powers, which are held back. They really shouldn't be Immediate reaction, because that means you can only use them once a round, which is very limiting. Move it to an Opportunity Action for both of them, and things will become more interesting on the battlefield. Promise.

These are the basic modifications I'd make to each of the classes. They make the classes more effective and flavorful, and give relevance to the tactical situations you'll run into in play.
Posted by Unknown at 1:06 PM 5 comments:

The Amazing Spider-Man #694 Review (Or Thank You, Spider Bob)

I have not owned a Spider-Man comic since One More Day, 2007. I won't lie: that stung, HARD. Spider-Man was the fictional love of my imagination since four years old, and still is. A guy who can swing high above buildings, climb walls and get out of the way just in time, plus he's wicked smart? Sign me up. But One More Day changed that. In my anger I threw away every comic I ever owned and swore off anything to do with the things.

Time's passed, and I stuck true to my promise. Well, sorta. See, while I never bought a comic in those five years I certainly kept up on Spidey's exploits. I regularly haunted SpiderFan for news and reviews, and watched Spidey evolve from afar. And believe me, I was not terribly impressed. Most of Brand New Day seemed... off. The constant juggling of writers and feels of Spidey wasn't something I really wanted to deal with, and this whole "Peter has to sleep with anything that moves" philosophy of the writers was... unsettling. But this Dan Slott guy? He was alright by me, cause he seemed to get the ol' Webhead in a way I hadn't heard anyone else really talking about since The Spectacular Spider-Man tragically ended. He knew the Spidey I knew, the one who had a wise-ass comment and then went home and worried about things like the rest of us. Now, if Marvel got THAT man to write a Spidey book? That I would buy.

Enter SpiderBob, a former roommate of mine. See, he had the balls to not give up on our Webhead. A SpiderFan is a SpiderFan, damnit, and he was gonna give his money regardless. Well, he kept telling me about how great Dan Slott's run was, and how much he enjoyed it. And I smiled, remembered One More Day, and listened to him. Then he brought the comics to our house. And I read them. I haven't told anyone this up until this review, but I remember going upstairs really quickly so I could cry. I know it sounds silly, but that's really how much it hit me. I realized that I missed buying and enjoying comics. But, me being me, I didn't do anything about it. I couldn't afford it at the time, and that was that.

SpiderBob wasn't done, not by a long shot. I have, in my hands, the first issue of my subscription to The Amazing Spider-Man, a gracious gift from SpiderBob. And, my friends, it feels GOOD to be reading Spider-Man again. I realize this probably isn't Dan Slott's best issue of the run. I mean, the whole thing with Alpha was resolved a little too quickly for my liking. But the dialogue, the action, the character work, they were all bloody spot on. Say what you will, this man's mediocre work is so good that I can honestly say that I think I'll follow this guy for a long time to come, come what may. I've already ordered the Spider-Island TPB hardcover, along with a lot of his Big Time run. And after hearing about the Superior Spider-Man I know I'll be getting it. Hell, I'm even getting back into comics in general, starting with Batman's Court of Owls storyline and subscription to Batman.

It's good to be back home, honestly. Even if Joephisto's stench is still on Spider-Man you've still got Dan Slott there to make it seem as if I'd never left at all.
Posted by Unknown at 10:17 PM No comments:

HOW COOL IS THIS??

When Michael Moore compares you to John Kerry, you know you have a problem.
Posted by Unknown at 9:34 AM No comments:

The French are Idiots... But We Already Knew That

Jeez, what is with people wanting to terminate their own race? I like human beings, why don't these idiots?

Seriously, it's worrisome when a civilization is so fixated on murdering their children. Europe's not doing too great with reproduction as it is, it doesn't need the help...
Posted by Unknown at 10:40 AM No comments: